Barcelona took another step forward in their Champions League campaign, eliminating Manchester United 4-0 on aggregate after a 3-0 win in the second leg of the Nou Camp. Lionel Messi was the star for the Blaugrana with two goals. His great rival Cristiano Ronaldo also netted on the same evening, but he was powerless to stop Juventus from exiting the tournament at the hands of a youthful Ajax side.

Messi flies to the Wanda, read Marca (Atleti’s Wanda Metropolitano will be the venue for this year’s final)

AS chose to focus on Cristiano and Juventus’ loss to Ajax, while Mundo went with the headline “A Messifinales” 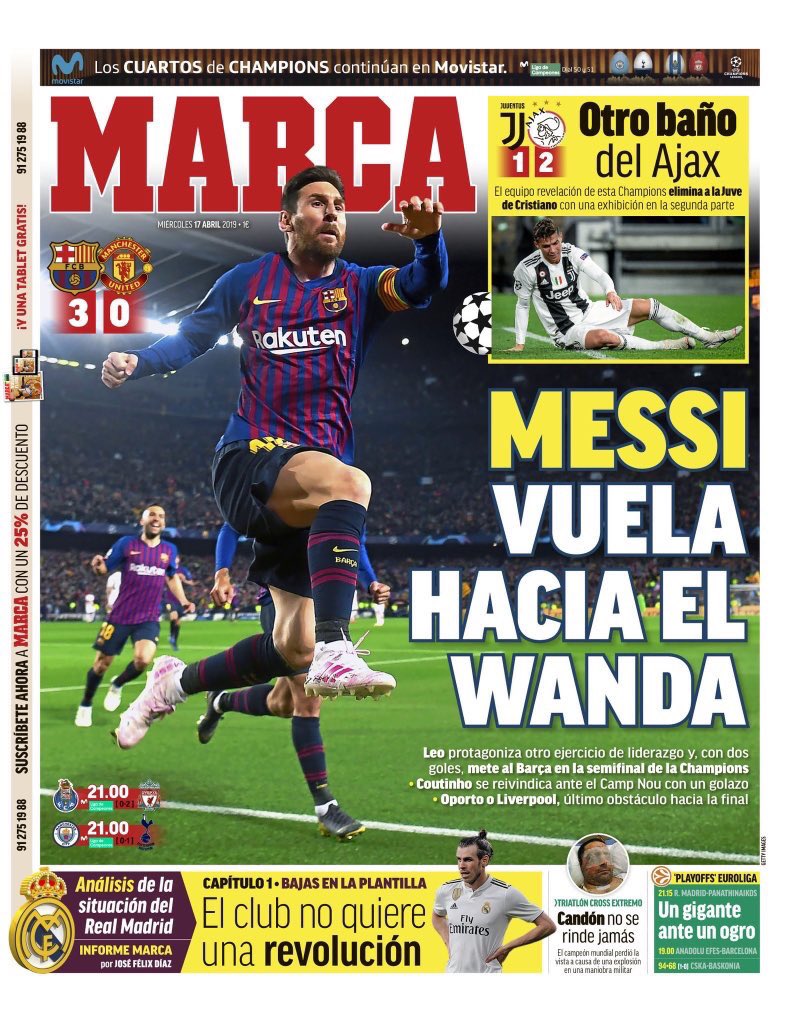 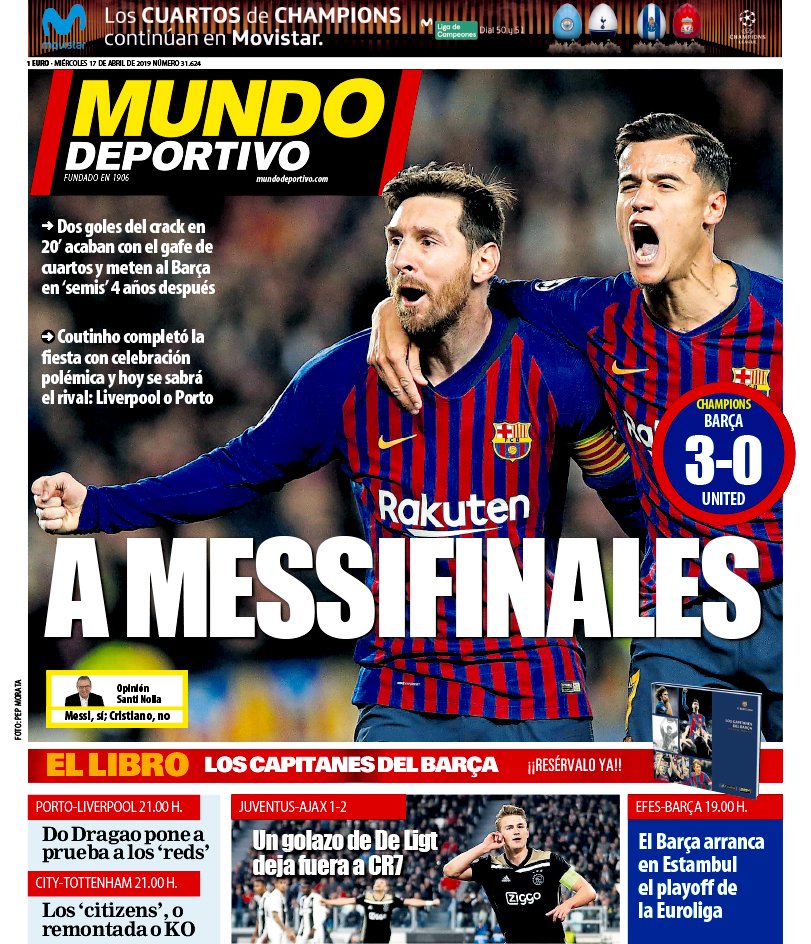 END_OF_DOCUMENT_TOKEN_TO_BE_REPLACED

Here is La Liga’s Team of the week for Round 32. This TOTW doesn’t include Real Madrid or Leganes players as their game was played on Monday night.

Three teams- Atleti, Valencia and Sevilla, make up almost two thirds of the TOTW. Atleti, who beat Celta 2-0, have Oblak, Montero and Griezmann in the XI. Valencia, who beat Levante 3-1, are represented by Guedes and Santi Mina while Mercado and Sarabia are in for Sevilla, who edged Betis in a five goal thriller.

There is no Barcelona player- the Blaugrana effectively played a B side who drew 0-0 with bottom of the table Huesca. END_OF_DOCUMENT_TOKEN_TO_BE_REPLACED

Here’s a look at La Liga’s team of the week from GW29. Valencia’s 1-0 result at the Ramon Sanchez Pizjuan against Sevilla was a big one for Los Che- they’ve now gone 16 games unbeaten, a record they last achieved 77 years back in 1942. It also saw VCF leapfrog Sevilla in the league standings.

Only three home teams won their respective games in Round 29- Barcelona and Real being two, with Celta the third thanks to their thrilling 3-2 win over Villarreal. Atletico registered their biggest win of the season, and that 4-0 triumph against Alaves has seen nominations in the TOTW for goalkeeper Oblak and Thomas Partey, who scored a fantastic goal over the weekend.

From the Spanish press itself, here’s a look at La Liga’s team of the week for games played in Round 28.

The week saw the return of Zinedine Zidane for the second time at Real Madrid, and the Frenchman started off with a 2-0 win over Celta Vigo. It earned nominations for Keylor Navas in goal and Luka Modric in midfield. The victory brought Real to within two points of Atleti, whose misery from their Champions League exit spilled into their performance domestically, with Athletic Club registering a 2-0 win over Diego Simeone’s men at San Mames.

END_OF_DOCUMENT_TOKEN_TO_BE_REPLACED

The Spanish media were effusive in their praise for Cristiano Ronaldo as the former Real Madrid and Manchester United star single handedly powered Juventus into the quarterfinals of the Champions League. Some would’ve wondered whether the Bianconeri overpaid for a 33 year old, but on the evidence of performances like these, that money looks like pocket change currently. No other player would’ve perhaps been able to do this, less so against Simeone’s Atleti, who are known to be miserly in defence and rarely suffer nights like these. In the eight years that the Argentine has been in charge of Los Colchoneros, they had never previously lost a knockout tie where they had triumphed in the first leg (CL, EL and Copa)

Barcelona are the only Spanish team alive in the Champions League now, and they are up against Bruno Genesio’s OL tonight. History favours the Catalans, and the twin exits of Atleti and Real will have the Blaugrana believing that this could be their year in Europe. England, on the other hand, could have four representatives in the quarters if Liverpool get the better of Bayern. 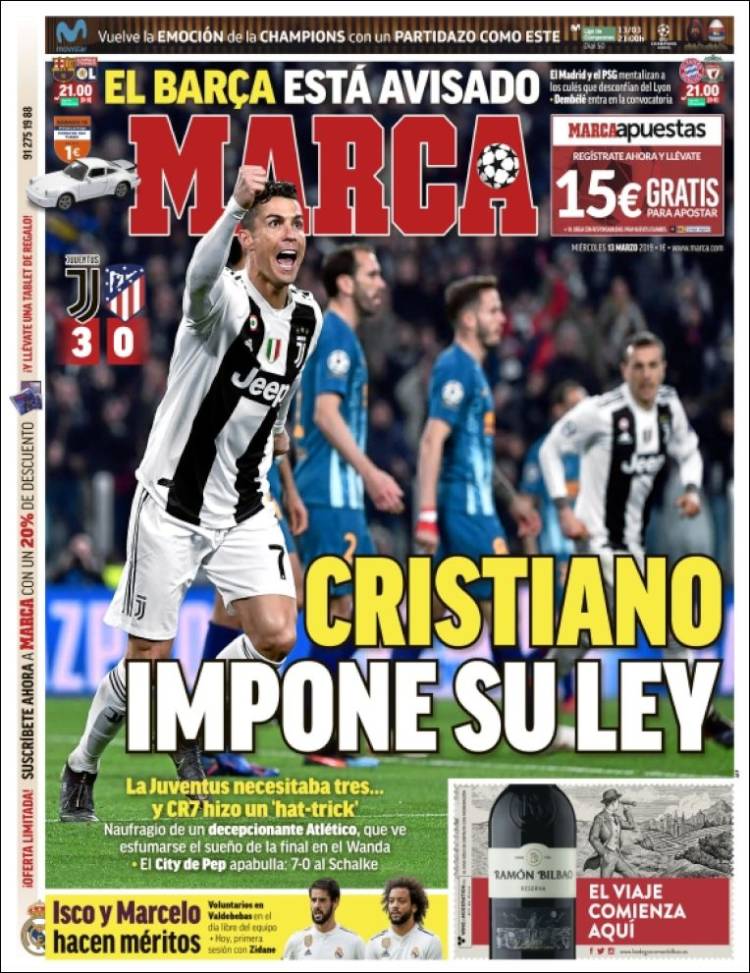 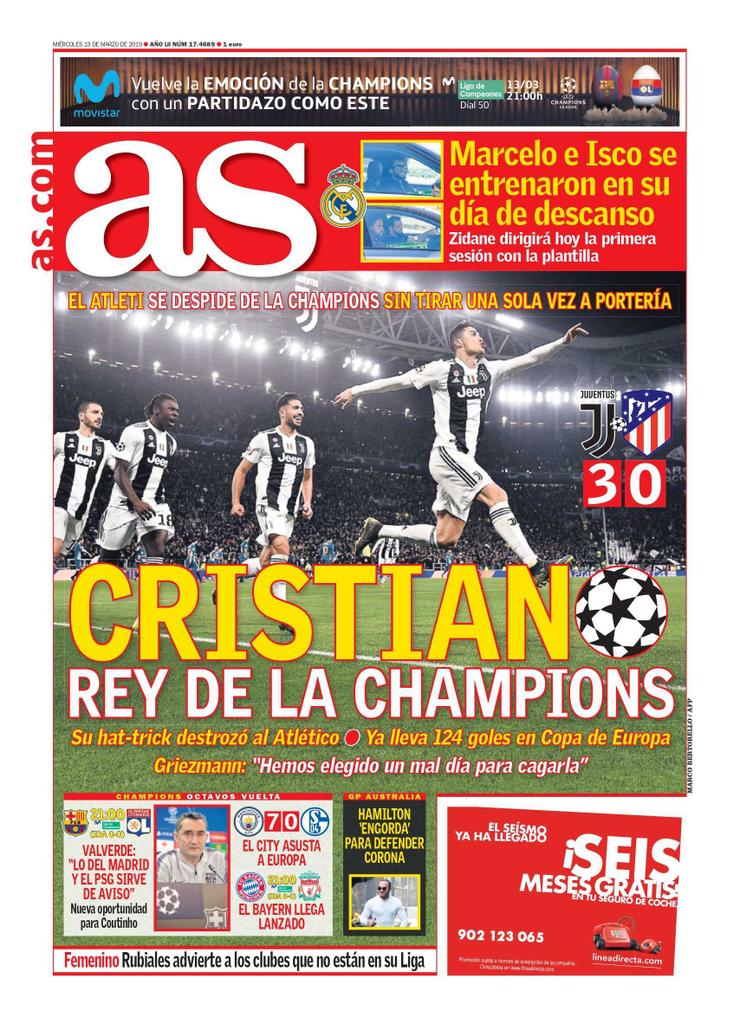 The Spanish Football Federation have confirmed the venues for the remainder of Spain’s home Euro 2020 qualifiers to be played later this year. La Furia Roja are in Group F alongside Norway, Sweden, Romania, Faroe Islands and Malta.

That’s two home qualifiers in Madrid and one each in Gijon, Cadiz and Valencia.